You are here: Home / Archives for morzine 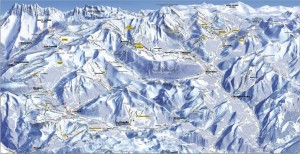 The 2014/15 season was the most ski-light I’ve had since I was 17, with just the one week on snow. Thankfully it was a pretty good week!

I had skied with Dad a year earlier where we met Al and his dad Jamie in a small chalet in St Martin de Belleville. That week we were hosted by the very lovely Cookie and Lou, a French/Australian couple who were making their first foray into the world of chalet hosting, having previously been in the film catering trade back in Oz. Their hosting, and in particular, Cookie’s cooking was certainly the best I had ever had, and Dad reckons the best he has had in nearly 40 years of ski holidays, so when we heard they were heading back to the Alps for a second season, we got in touch. This year they were working for independent chalet company Ride & Slide in Morzine, running the 7-bedroom Chalet Guytaune along with a third host, Meece. Luckily for us, they had availability during the very limited window of time we had available in early February and so we booked in: myself, my younger sister Sophie and our Dad in the extremely spacious family room (bedroom 5), and my older sister Rachel and her husband Nick in the double next door (bedroom 4). This was my first return to Morzine since my ski season there 8 years earlier…I was intrigued to see how it had changed!

Being an independent company, flights were not included so myself and the other ‘kids’ decided to drive out while Dad flew out a day later due to other commitments. Driving meant we could fill the car with all the extra things you can’t usually take, including my second pair of skis and my snowboard which I had bought in the town all those years ago. The pros and cons of self-drive ski holidays might need a post of their own I think…

Morzine is one of the closest resorts in terms of drive time to the UK and having set off from the outskirts of London at 5am, we were in resort in time for dinner. The food we experienced all week was really exquisite. Cookie introduces each course with knowledge and passion, describing exactly what we are eating and the cooking processes in detail. Anything you particularly like, he is more than happy to give you the recipe though you’d be hard pushed to recreate it without his skill. The wines were excellent too, complementing each course beautifully and served with charm by Lou and Meece. (We skiied with Lou and cookie on the last day, below). 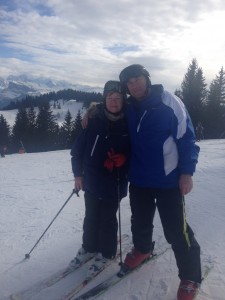 The chalet itself was excellent, and we shared it with a variety of people throughout the week as some only stayed for the weekend. A shared chalet can sometimes be slightly dubious as you never know quite who you are going to meet, but generally it’s a pretty safe bet as everyone is there for the same reasons. We lucked out this week, sharing with two young couples for the whole week, and some older couples at the beginning and end of the week all of whom were lovely. The highlight of the chalet was the hot tub which had gorgeous views across the valley and you were even allowed to take your beer in which is not always the case!

Conditions all week were excellent. Morzine is one of the lowest resorts in Europe, with the town at just 1000m so I certainly wouldn’t advise an early- or late-season trip, but mid-season, like when we visited, it can be ideal. There had been a recent dump just as we arrived and then the sun came out for most of the week, offering bluebird days almost all week…perfection! 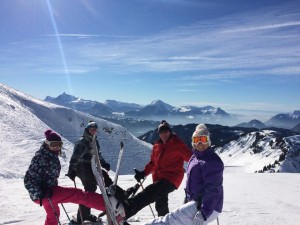 The Portes du Soleil ski area in which Morzine lies is one of the largest in Europe, if not the world, claiming 650km of pistes. The pistes are not all linked together, with some buses or walks needed through the small villages, but nonetheless, it’s a formidable area. It’s an intermediates paradise as off-piste for the expert skier can be trickier to find due to the relatively low altitude, but one of the best ways to explore the area is to have a go at the famous circuit. This year we completed it in the anti-clockwise direction, something I hadn’t done before. With 63-year old Dad in tow, we opted out of skiing the infamous ‘Swiss Wall’ this time, secure in the knowledge we’d all done it before! Some of the runs in the Les Crosets area were the highlight; wide, steep enough to get some speed up while still enabling you to carve really nice turns. And in early February, outside of the school holidays, there wasn’t a queue in sight! 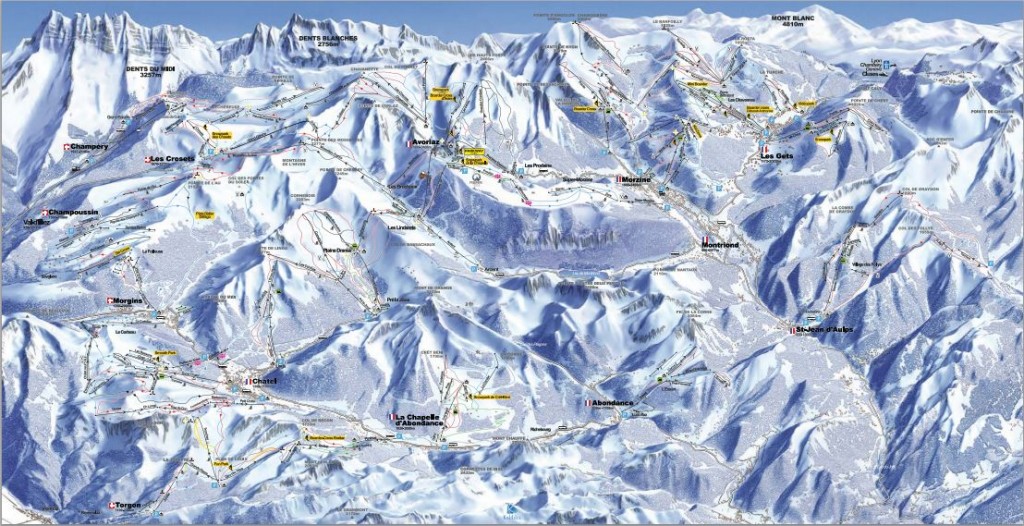 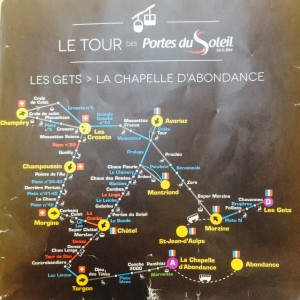 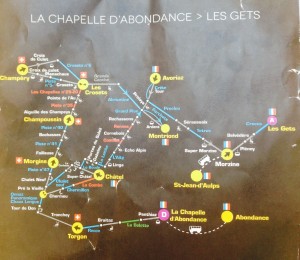 The area is little changed from when I worked here in 2006/07, but there have been some minor improvements. A new two-way chair link above Châtel (conveniently named the Portes du Soleil) means you no longer have to catch a bus through the village. It’s fairly terrifying in the anti-clockwise direction as you go over a ridge and down a pretty steep descent on the chairlift, but the views over the town are pretty good. Some speedier chairs and a new Chavannes gondola in Les Gets were the only improvements I noticed elsewhere. The long slog across from the SuperMorzine to Avoriaz is just as flat and arduous as I remembered! Even so, it’s definitely still one of my favourite ski areas, with something for nearly everyone: extensive nursery and improver slopes on the plateau at the top of Le Pleney, various parks and boarder crosses, with the two half pipes at Avoriaz some of the biggest I’ve seen, gorgeous sun spots for lunch, like La Grand Ourse at the top of Mont Chery or the bowl at Les Lindarets, decent off-piste if conditions allow, and vast, varied pistes for all abilities. 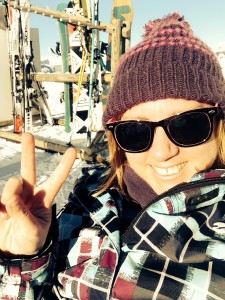 Something new we tried this year was night tobogganing down the pistes of Le Pleney. We booked at one of the operators in town (Indiana’Ventures in the shopping complex opposite the tourist office, €24 each) and met up at the foot of the gondola at 5.30pm. This also enabled us to have a drink at Le Tremplin, an on-piste hotel at the foot of the slopes which was just a hotel when I was last here. These days it’s a buzzing aprés venue with outdoor DJs and crêpe van and lots of comfy sofas to lounge on and watch people attempt the tricky Stade run into the town. Once at the top of the gondola we were given our head lamps and toboggans, and after a quick briefing all 40-odd of us went careering off down the piste. You could take it as fast or slow as you wanted and naturally, we went as fast as possible! There were a lot of crashes, some ice burn and a few lost sledges but it was definitely one of the highlights of the week. 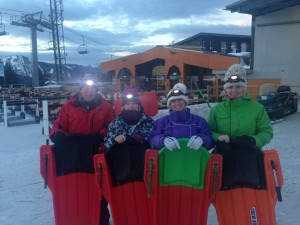 After a tasty meal out on staff night off at L’Etale restaurant on the pedestrianised street going up to Le Pleney, my 21-year-old sister Sophie and I took in some of my old haunts. Dixie’s was dead at 10pm, maybe too early, Rhodos still serves the infamous Mutzig extra-strong beer, we were too late for bar Robos and Buddha bar has morphed into the extremely similar Le Tibetan. We spent most of the night in Cavern, still one of my favourites. Sadly we didn’t make it to L’Opera next door, but it looked like that’s still pretty much the only late night option. So not a lot has changed in 8 years as far as I could tell! 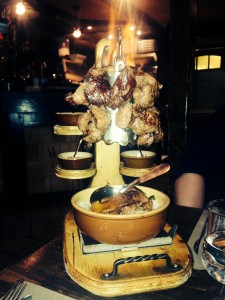 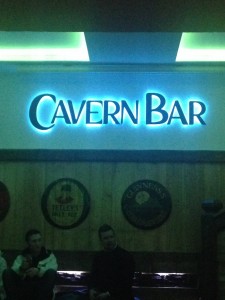 A fantastic return to an old friend – I’m planning on going back again in 2016 with my seasonnaire pals to mark our 10 year anniversary…Morzine will definitely always have a special place in my heart!

Runs: 7/10, varied and extensive, but low altitude means conditions sometimes let it down a bit.
Restaurants: 8/10, plenty and varied, but Cookie’s cooking still wins.
Apres Ski: 6/10, enough to keep you busy but it’s not Val.
Town: 9/10, an all-year round resort and proper town with every amenity you might need. The only reason it’s not a 10/10 is lack of ski in/out options due to the traditional nature of the resort.

Have you skied in Morzine yourself? Find any hidden gems? Keen to hear from you and keep building a great resource for others to learn from. 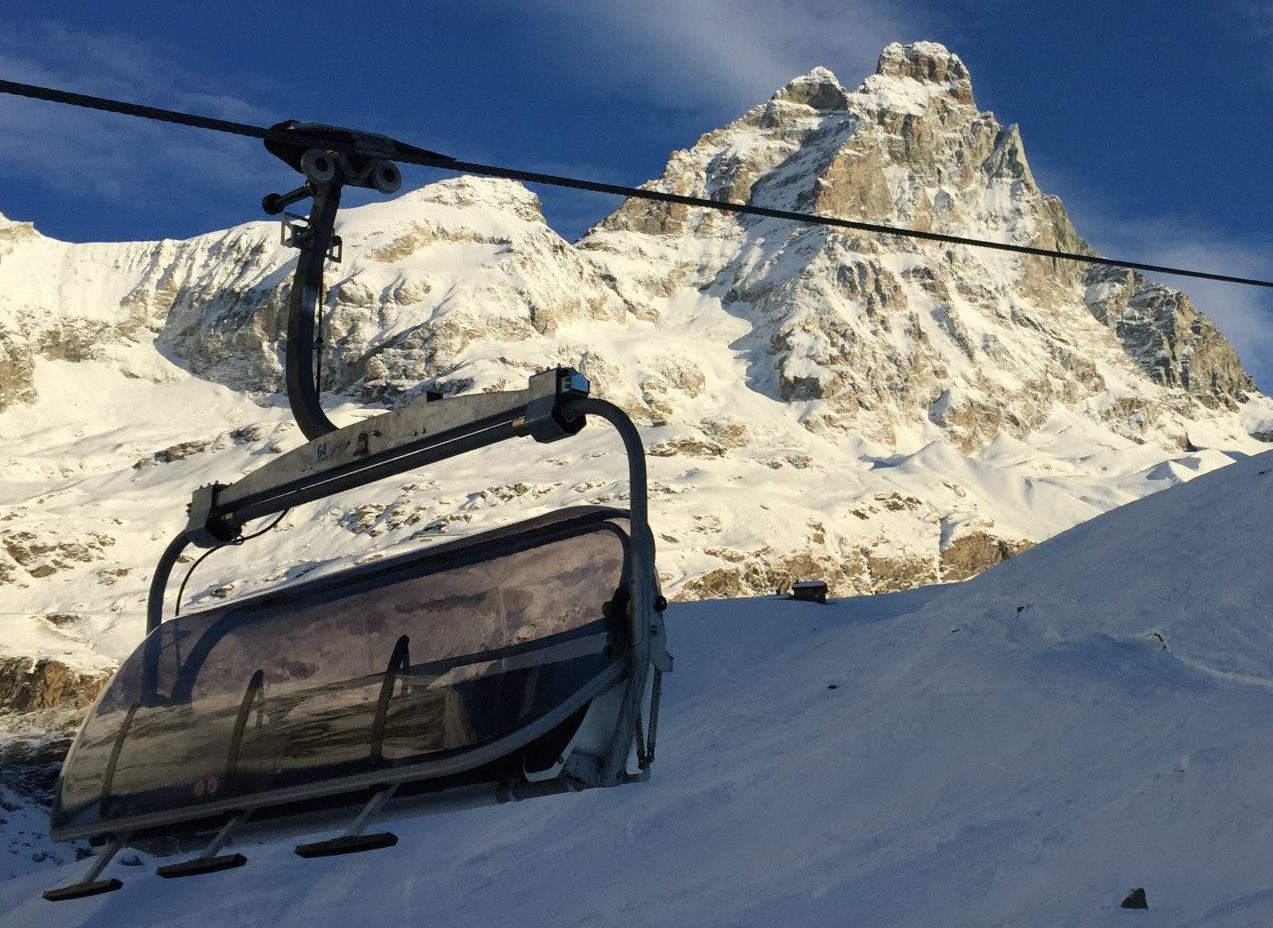